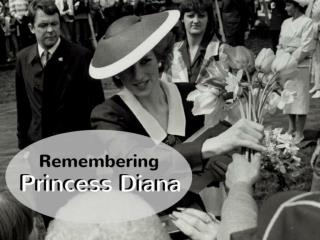 A look back at the life of Princess Diana on the 20th anniversary of her untimely death. PRINCESS DIANA - . made by: shannen abela. general information. when she was 20 years she got married to prince charles.

Princess Diana - . diana was born in 1961,into a very wealthy and aristocratic family. her ancestors acquired the title

Princess Diana Powerpoint!! - . by amanda hanuschek. childhood. she was born 6/1/61 in sandringham england dad was earl