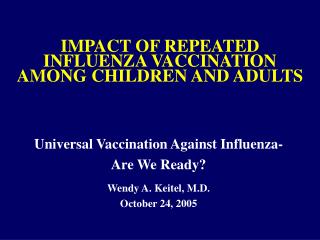 IMPACT OF REPEATED INFLUENZA VACCINATION AMONG CHILDREN AND ADULTS

IMPACT OF REPEATED INFLUENZA VACCINATION AMONG CHILDREN AND ADULTS Aromatherapy - What is it? - Aromatherapy is the practice of using the natural oils extracted from flowers, bark, stems,

Cystic Fibrosis - . by: nneoma ajiwe and angie olutimehin. how you get it (genetics wise). cystic fibrosis is caused by a

Understanding Risk - . an adventure in the perception of news . rebecca goldin, ph.d. director of research, stats