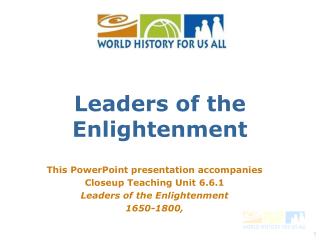 Leaders of the Enlightenment Leaders of the Enlightenment

The Age of Reason &amp; Enlightenment - . age of reason. scientific revolution convinced many about the power of

Leaders of the progressive era vocabulary - . tariff-tax on imported goods elite-best and most skilled members of a

Leadership For School Improvement - . leadership. big ideas: who leaders are in schools what leaders do in relation to

GUIDELINES FOR LEADERS - . ethical lessons from sitting bull. a presentation for the tribal leaders with character course