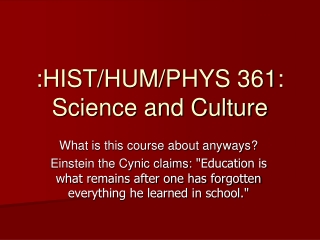 :HIST/HUM/PHYS 361: Science and Culture. What is this course about anyways ? Einstein the Cynic claims: "Education is what remains after one has forgotten everything he learned in school.". Thematic divisions -nic. The Scientific Revolution - . how did science begin to change the way people thought?. copernicus. galileo. newton. i.

HIST 202 Reminders - . please sign in on the papers by the exits if you have the vowell book....begin reading.