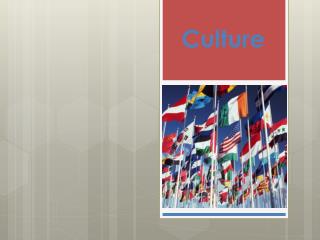 Culture. What is Culture . Lets pretend that you live in New York City… You cousin from out of town comes to visit…as you take her on a tour of the city you point out the different cultural neighborhoods like Chinatown , Little Italy , Spanish Harlem and Korea town . . What is Culture .

Culture of Oman - . by student : nasser mohsen nasser class: 11e1. i'll start talking about oman culture at all and i