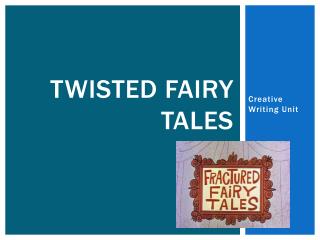 Twisted Fairy Tales. Creative Writing Unit. What is your favorite fairy tale that you remember from childhood (describe the story)? Why do you think you liked that one so much?. Background on grimm’s fairy tales. German brothers who published folklore (also cultural researchers)

Westward Expansion Vocabulary - . people who came from china to work on the transcontinental railroad. asian immigrants.

The Development of Orthodox Christianity and the New Testament - . by ed hensley. the big picture comparing the christian

Author: Jackie Mims Hopkins Genre: Modern Fairy Tale - . big question: what is unique about the landscape of the

Chapter 3: Conducted and Wireless Media - Objectives after reading this chapter, you should be able to: outline the