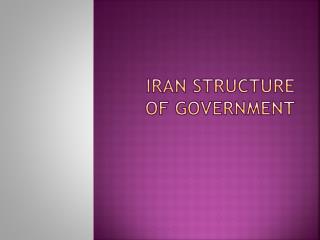 Iran Structure of Government. Organization of the Islamic Republic of Iran . Theocracy with some elements of democracy

Governance of Southwest Asia (Middle East) - . ss7cg5 the student will explain the structures of the national governments

The Islamic Republic of Iran - . death to everything!. sovereignty, authority, and power. existed sovereignly early on as

Iranian Government - . constitution of 1979 written by the assembly of religious experts ended monarchy regime change to

The Islamic Republic of Iran What is a theocratic republic? - . who has the power? who makes decisions?. as a

Iran - . by adamiller, suprak, and me!. iran. the world’s only theocracy form of government in which all laws are

Iran: Political Institutions - . lenny dong. one man above all others the supreme leader. single handedly the most

The Iranian Government - . why is iran, iran?. iran’s identity is the result of thousands of years of history deep

The organizational structure of Qard-al-hassan Funds in Iran - . by : abbas arabmazar (associate prof. of economics,