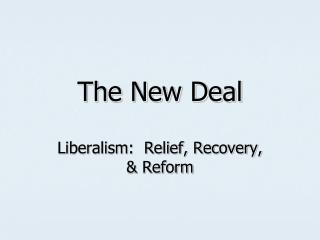 The New Deal. Liberalism: Relief, Recovery, & Reform. Hoover and the Economic Collapse. What specific programs/policies did Hoover and Congress employ to deal with the economic collapse?. Stormy Weather: The Century. FDR: The Election of 1932. FDR: Liberal Policies.

THE NEW DEAL - . america gets back to work. section 1: a new deal fights the depression:. main idea : after becoming

US HISTORY: GREAT DEPRESSION AND NEW DEAL - . weber 217. unit 5: the great depression and the new deal. all of you will

The New Deal - . i. new deal actions a. election franklin delano roosevelt in 1932. b. waiting for fdr to take

The New Deal - . how did the federal government’s role in the life of average americans radically change under

The Great Depression and the New Deal - . sirena rowland block 4. essential questions. how did roosevelt help the u.s. to

FDR AND THE NEW DEAL - . guided reading activity. franklin delano roosevelt. roosevelt was a wealthy new yorker and a

Unit 9: The Great Depression and The New Deal - . georgia performance standard ss8h8: c. discuss the impact of the

The Limits and Legacy of the New Deal - . i. short term failures of the new deal. political failures the supreme court

THE NEW DEAL - . america gets back to work. section 1: a new deal fights the depression. the 1932 presidential election

Chapter 12 The New Deal - . what were the key events of the presidential election of 1932?. americans blamed hoover and

Franklin D. Roosevelt and the New Deal - . introduction activity. write a one paragraph first person account as if you