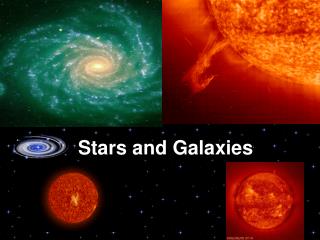 Stars and Galaxies. Unit: Stars & Galaxies. Topic: Our Sun. Objectives: Day 1 of 4 I will learn the definition of a star I will learn the process of fusion in the sun’s core I will be able to distinguish between the inner and outer layers of the sun. Quickwrite:.

Properties of Stars - . distances to stars. the distance to a nearby star can be measured by observing its parallax - the

Cosmology - . the expansion of the universe: (the hubble law). key concepts: 1. all galaxies beyond the local group are

Chapter 13 Galaxies: Normal and Active - . in this chapter, you will try to understand how galaxies form and evolve. you