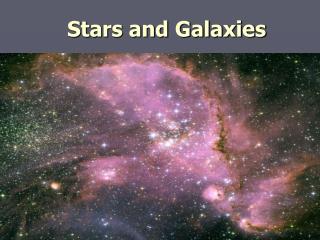 Stars and Galaxies. BIG Idea:. The life cycle of every star is determined by its mass , luminosity , magnitude , temperature , and composition. Much of our information about our galaxy and the universe comes from ground-based observations. Hubble Space Telescope:. In orbit since 1990.

Galaxies of Stars - . irregular. elliptical. spiral. instructions: copy the following notes on each slide and then

Galaxies - . what is a galaxy?. a galaxy is a large grouping of stars, gas, and dust in space that is held together by

Stars and Galaxies - . birth of a star lifespan of a star galaxies. evolution of stars. star is born. nebula large amount

Class 21 : Other galaxies - . the distance to other galaxies cepheid variable stars. other methods. the velocities of

STANDARD 4a - . students know galaxies are clusters of billions of stars and may have different shapes. galaxies. spiral

Stars &amp; Galaxies - . when sun goes home behind the trees, and locks her shutters tight--- then stars come out

Galaxies - . what is a galaxy?. a galaxy is a large grouping of stars, gas, and dust in space that are held together by

Galaxies Chapter 2 Section 3 - . galaxies. a galaxy is a large group of stars, dust , and gases . they come in variable

Stars and Planetary Systems and Galaxies, Oh My!!! - . goals:. you will understand the formation of stars, planetary

Characteristics Of Stars - . galaxy: a collection of stars, gases and dust. universe: contains billions of galaxies.

Stars, Galaxies, and Cosmology - . extra-solar planets. meaning planets around other stars. so far over 400 planets