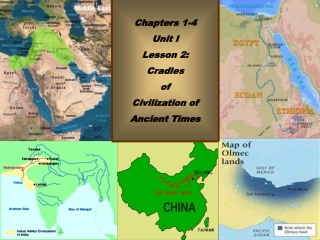 Chapters 1-4 Unit I Lesson 2: Cradles of Civilization of Ancient Times Chapters 1-4 Unit I Lesson 2: Cradles of Civilization of Ancient Times. Sumer. Located: b/t the Tigris & Euphrates Rivers in Mesopotamia (“land b/t the rivers”), providing fertile soil to grow crops to sustain life with a surplus of food from irrigation

Chapters 1-4 Unit I Lesson 2: Cradles of Civilization of Ancient Times

The Ancient Civilizations - . indo-european migrations: 4m-2m bc. the middle east: “the crossroads of three

Unit 7 - . what did the ancient egyptians give us?. egypt . before you read…. 1. where is egypt located? what is the

Chapters 1-4 Ancient Civilizations - . sswh1 the student will analyze the origins, structures, and interactions of

Egypt Wrap-Up Questions - . why do you think people continue to study ancient egypt today? why is studying this

Ancient Egypt - . around 5000 b.c. hunters settled in the area of the nile river. the egyptian civilization emerged more

Lesson 1.06 Honors - . unit conversion. cubic unit. cubed – is a math term that means the number or the unit is

Civilization - . a complex society in which people make advances in the arts, science, religion, and law. irrigation.

ANCIENT EGYPT and NUBIA - . ancient nubia. kush, the egyptian name for ancient nubia, was the site of a highly advanced,