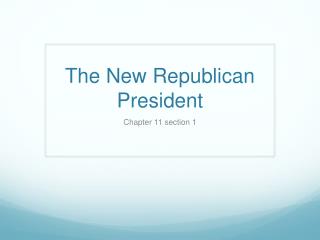 PROGRESSIVISM AND THE REPUBLICAN PRESIDENT - . apush chapter 29. introduction. at the beginning of the 20 th century, the

Dwight Eisenhower 34 th President of the U.S Republican - . early life. born in texas in 1890, brought up in abilene,

The Republican debates - Highlights from the fifth official republican presidential

The Republican Experiment - . final jeopardy. negotiated a treaty with the spanish that aroused southern and western

The Republican field - The official and likely candidates for the gop

The Republican Betrayal - . the role of presidential power in challenging republican convictions. i. american expansion.

Republican - . foreign policy. isolationism. a policy of pulling away from involvement in world affairs. wwi debts. what