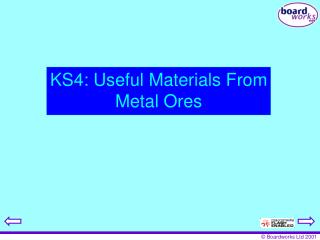 KS4: Useful Materials From Metal Ores. Getting Metals From Ores. Most metals do not occur naturally (native).They have to be extracted from metal containing rocks (ores.). First substances other than the metal compound are removed (concentration.) Using Metal Cutting Processes and Techniques - . interest approach. there are 2 pieces of metal that are the same size

Applying Metal Inert Gas (MIG) Welding Techniques - . interest approach. have you heard the term mig welding what are the

Chapter 6 Mechanical Behavior - . among the major three materials, metal is the most important, abundant, and useful