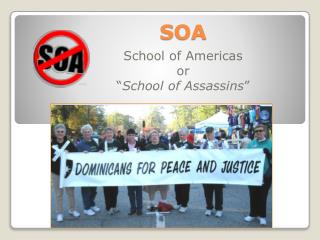 SOA. School of Americas or “ School of Assassins ”. ( now known as the Western Hemisphere Institute for Security Cooperation or WHINSEC ) soa - What is software architecture? the overall structure of the software and the ways in which that structure provides

SOA - . service oriented architecture (soa) is a business driven it architectural approach that supports integrating your

SOA Diploma - . 3.26.13 advisor and advisee all service hours are due by may 17 th turn your service forms in early to