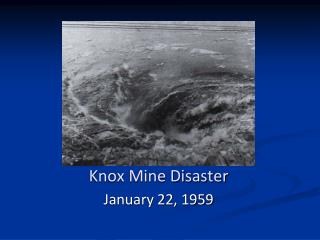 Knox Mine Disaster. January 22, 1959. Lesson Goals : We will deepen our understanding of coal mining in our local region, and gain knowledge of the working conditions and the dangers of the trade. Identifying Others - . unit 8. sentences. past i medium-body, now i fat family mine from ireland i born where?

Mine Recovery - Msha 2207 november 1981 june 3, 2005. mine recovery. northern mine rescue association. introduction. the

Earthquake, Severe Weather and Disaster Preparedness - . how to: prepare you and your family network for a regional