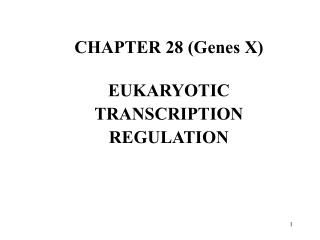 Trying to represent transcription - . the functions, the process, and the connections between the two. problems with

Transcription complex assembly: 1. The basic mechanism. 2. How do activators fit in? - . recall from before:. beta,

The Eukaryotes - . eukaryotes. generally larger than prokaryotic cells contains a nucleus and other organelles bound by a

V3 regulation of imprinted genes - . review of lecture v2 ... what does the differential methylation of cpg islands mean?

Regulation of Gene Expression in Eukaryotes - . bit 220 chapter 24. opportunities for the control of gene expression in

Lecture 3 what Genes are and What they do - . part ii three chapters. how the molecule of heredity carries, replicates,

[V]. Process of Transcription and Transcriptional Control of Gene Expression - . rna polymerases and initiation of