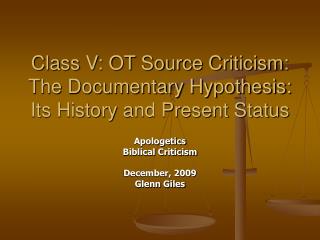 Dramatic Criticism on Taming of the Shrew - . and the elements of drama. the playworld of a play?. the imaginative

Biblical - . what is your world view? where did the world come from? – origin what went/is wrong with the world? –

Literary Theory Practical and Theoretical Criticism (Critical Lens) - . the view from which a piece of literature is

INTRODUCTION TO THE SCOPE OF LITERARY CRITICISM - . week 1 literary criticism sandya maulana , s.s. introduction to the

Apologetics - . was jesus mistaken about an early second coming?. did jesus teach he would return soon?. matthew 10:23

Literature and History (2): The Use of History in Literary Criticism - . literary history, new criticism and new