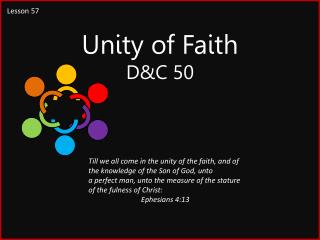 Lesson 57. Unity of Faith D&C 50. Till we all come in the  unity of the faith, and of the  knowledge of the Son of God, unto a  perfect  man, unto the measure of the stature of the fulness of Christ : Ephesians 4:13. Counterfeit Revelation. May 1831.

Lesson 6 types of text - . information can be provided in a variety of writing formats, including nonfiction books and

LESSON 3-1 - . journals, source documents, and recording entries in a journal. identify the steps in which transactions

Day 57 Solving Trigonometric Equations 5.3 - . what you should learn. use standard algebraic techniques to solve

Chapter 4 Lesson 4 Geologic Time - . geologic time scale a record of the geologic events and the evolution of life forms

PURPOSE OF LESSON - The bible teaches jesus is the christ willie a. alvarenga “thou art the christ, the son of the