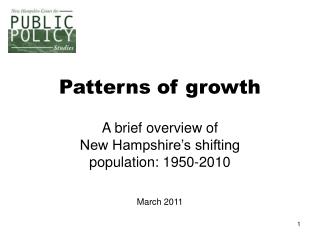 Growth Patterns - . learning intentions. i can explain that growth is an increase in mass i can state several ways as

Patterns of Growth in Fishes - . grow and survive to reproduce. growth patterns in fishes. context for study of growth:

Patterns and Growth - . john hutchinson. problem 1: how many handshakes?. several people are in a room. each person in

On the trail of strategic growth patterns of N. pulcher - . or: why don‘t they grow?. introduction - n. pulcher - about

Patterns of Inheritance - . chapter 12. early ideas of heredity. before the 20 th century, 2 concepts were the basis for

Patterns of Subsistence - Adaptation. people have an advantage over other animals in that we have culture as a means of

Patterns of Behaviour - . how we can predict what will happen in a chemical reaction. contents. the periodic table

Patterns of Inheritance - . ….or why rangas are being bred out of existence. monohybrid crosses. f 1 generation:

Patterns of trade - . how to work with trade data frank van tongeren based on presentations by henk kelholt and thom

Patterns of Organization - . eli 82. extensive reading. please take out a book and read silently for the first 10 minutes