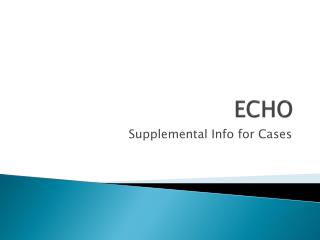 ECHO - . a system monitoring and management tool. yitao duan and dawey huang. challenge. how can we manage all these

Echo Sounding - . take the ocean map quiz. use depth data to make a profile of the ocean floor. goal: tonight’s

Echo Tops - . fairly accurate at depicting height of storm tops. inaccurate data close to radar because there is no beam

ECHO - PHYSICS - A simple presentation with sound clips on the