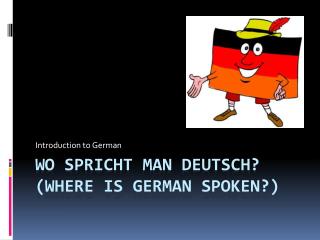 Wo spricht man deutsch ? (Where is German spoken?) Wo spricht man deutsch ? (Where is German spoken?)

German Greetings - . german letters. 1. in german, there are letters that are different than in english. 2. these letters

Why Learn German? Knowing German Opens Many Doors - . german is the official language of:. (official and working Deutsch 2 - . erste woche. course description, expectations, standards, and rules of conduct. this is an exciting time!

PSY 369: Psycholinguistics - . language comprehension. how do we turn our thoughts into a spoken or written output?. some

The Spent Arrow The Spoken Word, and the Lost Opportunity Are Gone Forever St. Paul - . you can’t step in the same