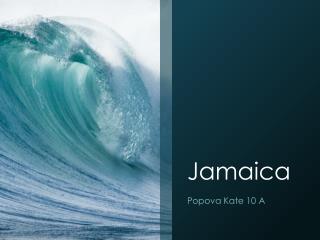 Morgan at Maracaibo - . morgan retuned to jamaica instructed by modyford to cease and desist peace had been declared once

Blackbeard: The most feared pirate of the Atlantic - . presented by carol holden and tanya klanert. the beginning of

The Application of the CDM M,E&amp;R Framework at the National and Regional Level - . 5 th annual cdm conference

JAMAICA HOPE - . a solution to your needs for tropical dairy cattle genetics. 13-08-2008. breed origin. derived from

Managing Risk in a “Climate of Change” Challenges and Opportunities for the Caribbean - . presented to ifes symposium

Jamaica Louise James - . day one. question of the day. what kind of things do you like to draw?. i like to

A Small Place by Jamaica Kincaid - . a small introduction for english 10. antigua.