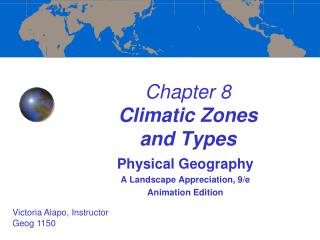 Climatic Zones on Earth - . climatic zones on earth. tropical climates &amp; dry climates. in this lesson you will:

How do Temperature and precipitation determine climatic zones? - . the world is divided into climate zones that are

Unit 8: Climatic Interactions Part 2 - . warm up. construct an anemometer. what is this object? anemometer, instrument

Chapter 4: “Ocean Zones” - . i. exploring the ocean. learning about the ocean: all people have studied the ocean

Climatic Diversity - . presented by: group- a. introduction. temperature, rainfall and humidity of region changes with

Climatic design - . aceh, indonesia, 2007. this workshop will look the importance of understanding how climate variations