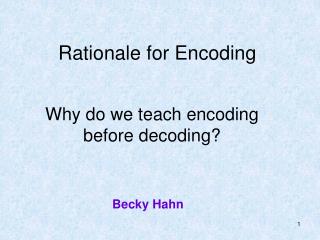 Rationale for Encoding. Why do we teach encoding before decoding?. Becky Hahn. “It is easier for students to begin with encoding through the auditory channel because it follows the natural progression of language development.”. Beth Slingerland. Rationale for Development - . nursing people with cancer in scotland: a framework (sehd, 2004) series of 3 documents.

Rationale - Crossing boundaries in undergraduate biology education: an integrated a pproach to teaching and learning dirk

Rationale - Relation of iron and zinc to child cognition and behavior problems: moderation by permissive parenting and

Rationale - . i chose to do an agenda because i though that it was a wonderful way to show the working conditions.

Rationale - Amfic on airsat- a web data base for hosting and easy retrieval of atmospheric data from satellites.

Rationale - . with the emergence of more internet users each day, organizations that provide health information, such as