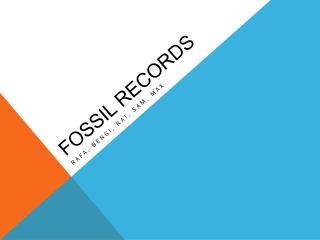 Down to the Sea in Ships: How did They Get Here? by Bev &amp; Ken Rees - . agenda. some definitions arrival records

Heredity - . fadtp 4-1. we are learning to explain that diversity of species is developed through gradual processes over

GEOL 240 The Dinosaurs: Introduction - . summary. what is a fossil? the science of taphonomy how it works. what is a

Florida’s Public Records Law - Notes: 1 . all quotes from the standard specifications are from the 2010 edition . 2 .

Kingdom Protista - . pond water protists. if you look at a drop of pond water under a microscope, all the