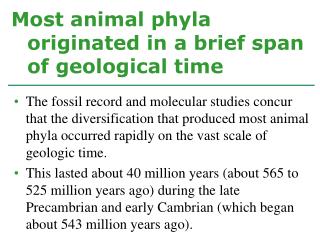 Most animal phyla originated in a brief span of geological time Most animal phyla originated in a brief span of geological time

The Geological Time Scale - . geological time scale. the earth is about 4.6 billion years old since then earth has

-There are about 35 phyla of animals, most of them marine, totaling over one million species. - - hox -genes.

Solitaire Marine &amp; Offshore - . who are we.

Chapter 12: The History of Life - . 12.1: the fossil record. objectives: describe the ways that fossils can form.

The Evolution of Prokaryotes

Library of Congress Classification - . classification. the intellectual process by which things or concepts are organized