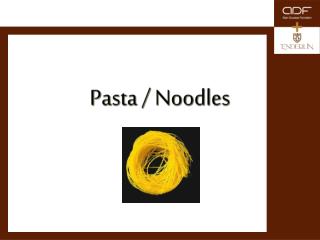 Pasta / Noodles. History. The common myth, that Marco Polo has brought noodles to Italy and so introduced pasta is just exactly that – A Myth. It is an undisputed fact although is, that the Chinese were consuming noodles as early as 2500 BC. 5 Most Popular Types of Pasta - The staple food of italian cuisine, pasta is a world favorite. whether you’re in

Happy Monday!!! - . take out your vocab so i can come around a check it did you know: there are 216 noodles in a can of