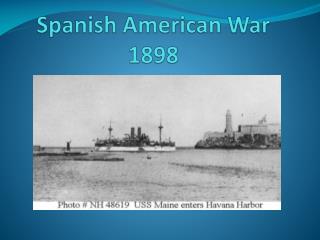 Spanish American War 1898. Cuban Rebellion 1895-1898. Spain smashed and defeated a Cuban Rebellion forcing Jose Marti to flee to the U.S. to gather money, arms, and troops. In 1895, Marti returned to Cuba and led a revolt Many people including Marti died. Jose Marti The influence of Spanish on American English - . by josep antoni bravo i súbies coventry, february 2011. the influence

10-30-07 Obj: To understand the causes and effects of the Spanish-American War - . focus: define imperialism and the

Spanish-American War - . chapter 9 section 2. essential question. what were the causes and effects of the

The War of 1898 - . “a splendid little war”. focus question. what characteristics might lead people to consider a war

The Spanish-American War - . causes rebellion in cuba cuba had been a $50 million investment by americans for its

PREPARED BY D.L. BULL - Spanish american war. prepared by d.l. bull. war in the philippines and caribbean. who what when

18.2 The Spanish-American War (1898) - . objectives: 1. contrast american opinions regarding the cuban revolt against