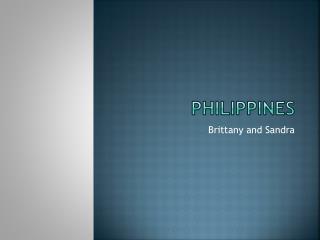 Philippines. Brittany and Sandra. Location:. Southern East Asia. History:. The Philippians had a revolution from 1896-1898.

The Philippines - . traditional life and culture. map. map. pre history. in 1962 dr robert fox found a skull that was 22

Disability Rights in the Philippines (with a focus on education) - . presentation by: carolyn, ryan, holly, chantel,

CLE PROJECTS IN THE PHILIPPINES - . (past, present and future…). rizalina c. labanda board of directors, ira-delaware,

My Ancestors In Philippines - . aeta’s and negrito’s. botolan tribes in zambales, philippines. this could be one of

EOA 13: JOINT OPERATIONS IN THE PHILIPPINES I - . end state: reoccupation of the philippines is a united states

The Philippines Rice Terraces of the Philippine Cordilleras - . wolf june 2013 cgg 3oi. where is the philippines?. south

Disability Rights in the Philippines (with a focus on education) - . presentation by: carolyn, ryan, holly, chantel,