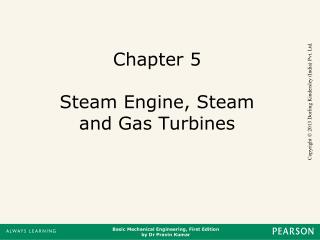 Chapter 5 Steam Engine, Steam and Gas Turbines. Steam Power System. Steam power system is a system in which the heat energy of the steam is used to produce mechanical power.

Parts of a Steam Engine - . tender. container holding water for the boiler and coal for the fire box. cab. compartment

Gas/Steam Medium - . if the medium is already a gas/steam, the phenomenon that the flow medium will change from the

Steam turbines - Nimesh gajjar. steam turbines. what exactly is the turbine?. turbine is an engine that converts energy