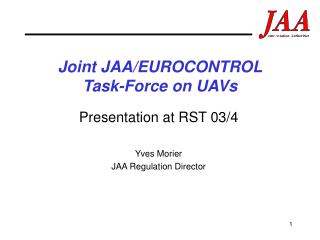 Joint JAA/EUROCONTROL Task-Force on UAVs. Presentation at RST 03/4 Yves Morier JAA Regulation Director. OUTLINE OF THE PRESENTATION. What are JAA and EASA What is EUROCONTROL? Why a joint Task-force? Assumptions The Terms of Reference of the Task-Force. Task-Force discussions items TASK FORCE ON AGING - Vision. a community where seniors are valued, supported and empowered to attain the highest quality

Task Force on Governance Reflections - . jon hagler may 26, 2009. introduction. privileged to be with you today a very

Task Force on Indigent Defense - . actual innocence – establishing innocence or guilt the use of dna march 8-10, 2010.

Joint Task Force on the Future of the PA Workforce - . notes from the field april 14-16, 2011 washington dc. session

Task Force on POPs - Generic guidelines and procedures. task force on pops. aim. aim give an overview of the time