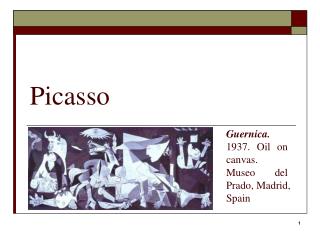 Picasso - Master of color and shape this painting is painted in a style called cubism . what story do you think the

Picasso - . cubist. we have been looking at the art of picasso. picasso was a famous painter from spain. he was a

Picasso - Http://www.pablopicasso.org/guernica.jsp. picasso quotes action is the foundational key to all success. are we

PICASSO - . from a two-dimensional vision to the three-dimensional representation. picasso’s life in the south

Aesthetics Presentation #6 The Art of Pablo Picasso - . a 20 th century question: what is art? . “each [work of art]

Pablo Picasso - . 1881-1973. informaci ón general. pablo ruiz picasso was a spanish painter and sculptor. he is one of

Pablo Picasso - . the best known artist of our times. pablo picasso (1881-1973). growing up picasso. picasso was born on

Pablo Picasso - . “i am always doing that which i can not do, in order that i may learn how to do it.” “every