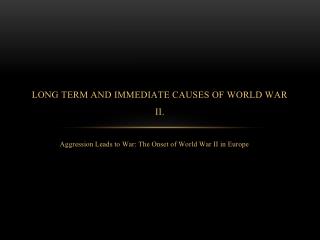 Long term and immediate causes of World War II. . Aggression Leads to War: The Onset of World War II in Europe. The Devastation of Europe after World War I and failure of the Versailles Treaty weakened Europe. . The Great Depression caused widespread poverty and instability in Europe.

Unit: World War I Topic: Long-Term Causes - . war is inevitable. as the 1900s began, forces were pushing europe toward

Causes of World War I - . do not copy.......yet!!!!!. introduction. robert borden became prime minister of a peaceful and

Causes of World War 1 - Do now! fill in your table of contents . have flashcards and maps on the corner of desk. answer

CAUSES OF WORLD WAR I - . 1) nationalism a deep devotion to one’s nation served as a unifying force within a country