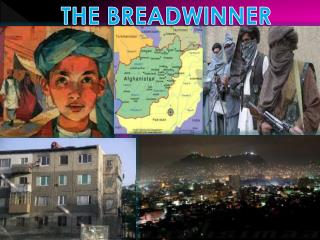 The Breadwinner Glossary - . by: anna, selin, alex, and lane. burqa. a long tent-like garment, which the taliban have

The Breadwinner By Deborah Ellis - What is responsibility? read two books: f is for freedom by roni schotter and the

The Breadwinner - . the breadwinner is a story about a girl who becomes the sole provider for her mother and siblings.

The Breadwinner - . by deborah ellis. what is life like in afghanistan?. what do you know about the country of

The Breadwinner - By deborah ellis. the breadwinner. how has life changed for parvana’s family in ten years? imagine

The History of the Taliban - . parker stone .

The Taliban - . by: shanderra garvin . w ho are the taliban?. religious/political party in afghanistan taliban: students

The Taliban and Al Qaeda - . turn to page 22. read the 1 st two paragraphs under the heading “why did osama bin laden

The Taliban - . by: taylor boger. where did they come from and how were they formed?. the taliban’s flag . the

The Breadwinner (Glossary) - By: elizabeth and liam. the breadwinner (glossary). burqa. a long, tent like garment, which

Who should be the boss in a family – the man or woman? - Who ought to worry about the family’s health ? who ought to

Transformations: Gender, Reproduction, and Contemporary Society - . week 7: beyond the nuclear family: can parenting