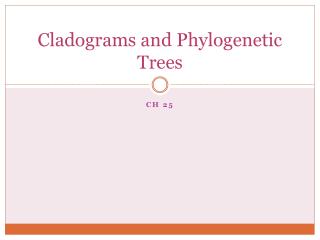 Cladograms and Phylogenetic Trees. Ch 25 . Overview: Investigating the Tree of Life. Phylogeny is the evolutionary history of a species or group of related species Biologists draw on the fossil record, which provides information about ancient organisms.

Phylogenetic Inference - . involves an attempt to estimate the evolutionary history of a collection of organisms (taxa)

Phylogenetic analysis - . a brief introduction in 2 x 4 hours. brigitte.boeckmann@isb-sib.ch. what you can learn today.

Trees - . chapter 8. chapter objectives. to learn how to use a tree to represent a hierarchical organization of

Dynamic Trees - . goal: maintain a forest of rooted trees with costs on vertices. each tree has a root, every edge

CHAPTER 5 Trees - . trees. root. leaf. definition of tree. a tree is a finite set of one or more nodes such that: there