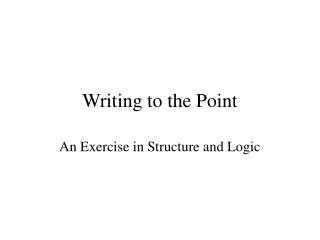 Writing to the Point Writing to the Point. An Exercise in Structure and Logic. Step One: (Label each step as you proceed) Write a simple declarative sentence that makes one statement; not a question or a command, but a simple statement. Use this formula: Someone is/ does something Something does/ did something

Writing to the Point

College Writing Goals - . c omfort with writing and the writing process. c onfidence as a writer and reader. c

WRITING THE DBQ – TEACHING POINT OF VIEW - . ap world history. the basic core. students must obtain points to get “to

Section 5.3: Writing Linear Equations Given Two Points - . int. math i. steps to follow when given 2 points:. 1. find the

The PEE Model for Writing - . point evidence explain. pee writing. what is the point you are trying to make? how does it

1st Formal Writing- Narrative - . eng i honors. what is narration?. a narrative relates a series of events, real or

Paragraph Writing - . our aim. today we are going to find out: why we use paragraphs how to structure a paragraph what

Point of View - . definition. point of view- is the perspective of a story’s or poem’s narrator. first person point

Persuasive Writing - . purpose of persuasion. this type of writing is meant to convince the reader of your point of view

Point of View and T.C.Boyle - . point of view. author = narrator quick definition: the perspective from which a story is