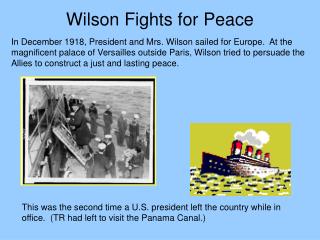 Wilson Fights for Peace. In December 1918, President and Mrs. Wilson sailed for Europe. At the magnificent palace of Versailles outside Paris, Wilson tried to persuade the Allies to construct a just and lasting peace.

A World Without Sight - . intro: what is life like for a person that cannot see. how do they develop from birth and how

Imperialism and World War I - . imperialism. “the policy of extending a nation’s authority over other countries by

End of world war I - . end of fighting and treaty of versailles. u.s. turns tide of war. by joining war, the united

What is happening in the world? - . security threats of new types and from new and unexpected sources emerging and

Wilson’s Peace Plan - . how one man’s plan for peace wasn’t enough to secure it!. peace without victory. many,

Conditions of World War I - . world war i – let’s review !. what were the four long-term causes of world war i? what

Our World - . everything on earth can be grouped as: living non-living living things can be put into 2 groups: plants and

Woodrow Wilson, His 14 Points and the League of Nations - . as wwi drew to a close…. president woodrow wilson called