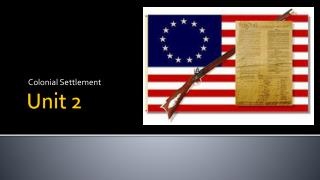 Colonial Settlement. Unit 2. Unit II Standards. SS.8.A.2.1: Compare the relationships among the British, French, Spanish, and Dutch in their struggle for colonization of North America. SS.8.A.2.2: Compare the characteristics of the New England, Middle, and Southern colonies.