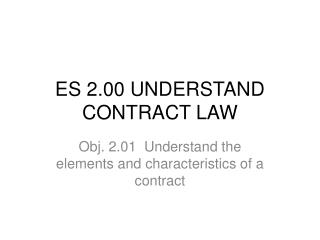 ES 2.00 UNDERSTAND CONTRACT LAW. Obj. 2.01 Understand the elements and characteristics of a contract. Elements of a Contract. Offer Acceptance Genuine Agreement/Assent Consideration Capacity Legality All elements MUST be present to be an enforceable contract. OFFER.

Chapter 3 Agreement: Offer and Acceptance - . introduction. offer and acceptance and consideration and no lack of

Law of Contract Misrepresentation - . when negotiating a contract, the prospective parties may say many things which are

LAW OF CONTRACT: ELEMENTS OF CONTRACT (CONSENT) - . prepared by: nurul nasihin ariffin kpmbp. consent in a

“ No consideration no contract”-Exception to the rule - . natural love and affection

Contract Law - . chapter 6. what must be in a contract?. offer and acceptance genuine assent legality consideration

Contract Law - . formation and legality class 2. the whole duty of government is to prevent crime and to preserve

Contract Law - . the law of contract. most relationships between the stakeholders in business are governed by contracts.

Contract Law - . target. i can explain and identify all five elements of a valid contract. contract:. a legally binding

Contract Law - . what is a contract?. a contract is an agreement between 2 or more people to exchange something of value.