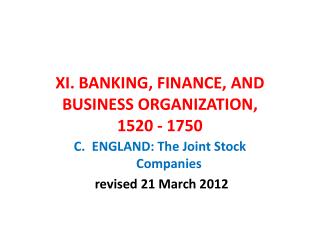 Business Organization and Finance - . what is a sole proprietorship ?. a form of business organization where one person

Business Organization And Finance - . chapter 5. sole proprietorship. one person owns and operates the business. over the

Banking and Finance - . virginia standards of learning. ce.12 the student will demonstrate knowledge of the structure and

ISLAMIC BANKING AND FINANCE: - . what’s in it for canadian companies? mohammad fadel canada research chair in the law

Banking Business And Banking Instruments - Banks offers financial instruments such as sblc, ltn, ktt and much more. the