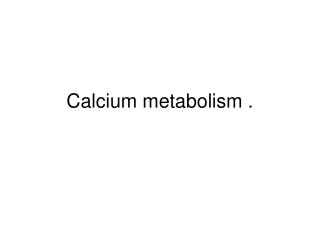 Bone Metabolism and Calcium - Bone. function:supports the body and protects vital organsreservoir of calcium and

Calcium Metabolism Preparation by - University of kufa center for development of teaching and training of university.

Calcium Metabolism, Homeostasis &amp; Related Diseases - . objectives of lectures. by the end of these lectures,

Study Guide for Calcium and Phosphate Metabolism - . the most important first messengers for dental biochemistry include

Bone Physiology, Hormonal Control of Calcium Metabolism, and Osteoporosis - . bone physiology. the skeleton has the

Calcium - . hypercalcemia hypocalcemia. calcium. 99% of the bodies calcium is in the bone in calcium phosphate compounds.