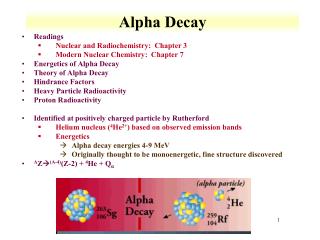 Exponential Decay - . exponential decay. a quantity is decreasing exponentially if it decreases by the same percent r in

What is a nuclear reaction? - . any reaction that causes a change in the nucleus of an atom. radioactive decay (alpha,

Learning Objectives: - . nuclear reactions result from instability of the nucleus. certain combinations of nucleons are

Tooth Decay - . by: khalifa 7b. learning objective by the end of this power-point you will be able to:. describe how

Radioactive Decay of Plutonium-239 Over the course of 80.8 Million Years - . by prayush singh. plutonium-239 (half-life:

What is Radiation - 2. what is radiation?. radioactivity is a natural and spontaneous process by which the unstable atoms