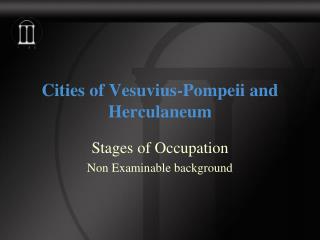 Cities of Vesuvius-Pompeii and Herculaneum Cities of Vesuvius-Pompeii and Herculaneum. Stages of Occupation Non Examinable background. Reliability of Sources. Sources are largely archaeological, but given the history and changing methods of excavation, remain to some degree, limited in reliability

Cities of Vesuvius-Pompeii and Herculaneum

Worst cities for traffic - The ten most gridlocked cities in the

Early Renaissance Art - There was a new emphasis on humanist, secular thought which emphasized science, reason and the

Land Use - . ch 14 &amp; 15. land use categories. urban agricultural forests parks and protected. urban. for the

URBAN GEOGRAPHY - . chapter 9. key question:. when and why did people start living in cities?. cities. city – a

Axial Planning in Architecture - . typical child’s drawing of a house. the baths of diocletian, rome (212-216 ad ),