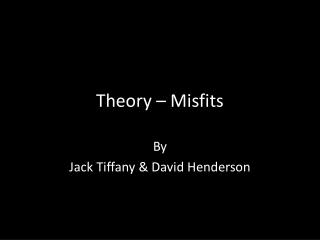 Part II: Theory and Taxonomy of the Millon TM Inventories - . pearson assessments and the institute for advanced studies

PROTISTS - . protists – “misfits”. single-celled or simple multicellular eukaryotic organisms that do not fit in

Misfits - . introduction to the show. the first showing of misfits was on 12-11-2009 it was created by howard overman who