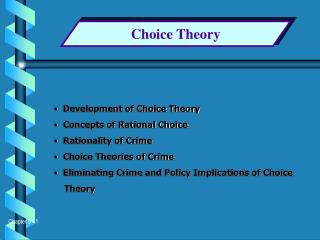 CHOICE THEORY - Question / philosophy. you have a choice in everything that you do and feel in this life? you are only

Rational Choice Theory - . hassan ibrahim . what is it ? . well rational choice theory is a one of the four main

Social Choice Theory - . by shiyan li. history. the theory of social choice and voting has had a long history in the

PUBLIC CHOICE THEORY - . oh, no! another unseen hand metaphor. all your life, you’ve been taught. democratic

Rational Choice Theory - . humans are “rational actors” . . . we make choices that we think are best by calculating

Consumer Choice: Indifference Theory - . the basic assumption here is that consumers are motivated to make themselves as