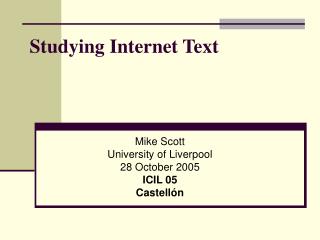 WHAT will we be studying? - . standard 6-1: the student will demonstrate an understanding of the transition of humans

Studying Ceramics Vocabulary - . air pockets. air which is trapped inside the body of the clay. this expands and can

Intention for Seeking Knowledge by Imam al-Haddad and Selected Duas for Studying with Arabic text, transliteration, and

The Internet and World Wide Web - The internet next what are some services found on the internet ? p. 68-69 fig. 2-1

4 Things That Can Derail Your OET Review - Get rid of as many study distractions as you can before you start your review.