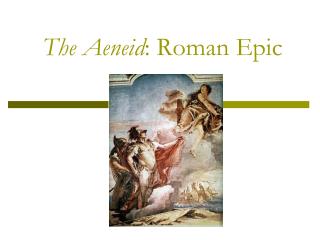 The Epic Poem &amp; The Epic Hero - . epic. a long narrative poem that relates the great deeds of a larger-than-life

The Epic - Myth—contains supernatural elements to explain the natural world; gods and goddesses interact with humans.

Aeneid I.418-440 - . aeneas and achates , rendered invisible by venus, proceed to carthage and admire the rising

The Aeneid Book III - . by: regan ewing, virginia smith, and laura spence. story plot. aeneas is telling dido about his

Epic elements of the epic - . english 12 . epic. long narrative poem that tells of the adventures of a legendary hero in

Roman Kings - . and the founding of rome. the aeneid. aeneas escaped from burning troy with his father, anchises , on his