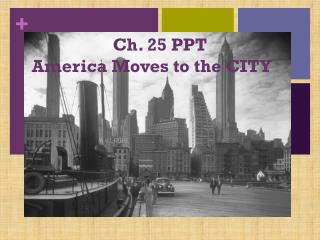 Ch. 25 PPT America Moves to the CITY . Tmwk Ch 25. 1. Graph pg 560 What topic is the graph depicting? Share one pattern or trend from the graph. When did more than half live in the city? 2. Diagram Pg 561 Describe how it was to live in a dumbbell tenement. Megalopolis.

Chapter 6: Urban America - . european and asian immigrants arrived in the united states in great numbers during the late