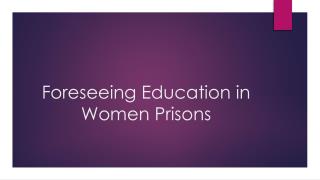 Foreseeing Education in Women Prisons. What is Prison?. Prison is an institution that a person is sent to in order to be punished for a crime that he/she has been found guilty of committing (Behan, 2007). Prison is not only used as a punishment now, but as a form of rehabilitation.

Working for Women’s Rights - . chapter 16 section 3. education reform. women had few rights or opportunities in the

Private Prisons - . the argument for: privatization as an ideology control government spending better service for less

The Prison Reform Movement - . by tyler, brandon, emily z, victoria, and marc. about the prison reform movement. goal was

Private Prisons - . by yixin shen and patrick shin. private prisons are…. prisons that are run by third parties that