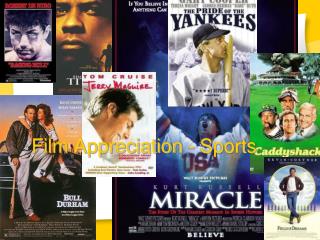 Film Appreciation - Sports. Sports Films. Sports are naturally exciting and filled with drama, we root for or against teams and players A movie about sports can build upon this natural entertainment - we feel the same about fictional sports characters as we do about real ones

SUMMER BLOCKBUSTERS - . joseph the dreamer. genesis 37 - 50. what is god’s most powerful

Film Appreciation - . monster madness! we will try to define what is a ‘monster’? what are some famous movie monsters

SUMMER BLOCKBUSTERS - . you have not passed this way before

Introduction to Filmmaking - . the assignment. each student will create their own original film, approximately 2 minutes Film Appreciation - . films communicate in their own special way using - the language of film!. 1. films construct